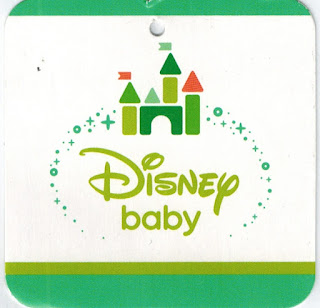 This hang tag is for Disney Baby, and it certainly has some interesting features. The front is pure Disney, in a series of pastel greens. There is Disney written in the Disney font with the magic castle logo above, rendered in building block treatment. The magic sparkles connect the two.

The reverse starts with a message encouraging purchasers to "Discover the magic on Disneybaby.com." Not quite a name.com example, as it appears in a sentence, although I am always critical of sub domains such as this. 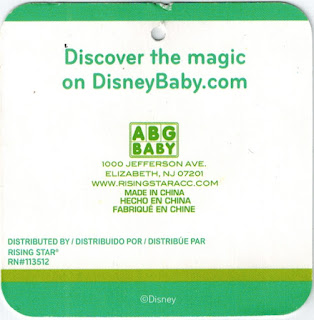 Perhaps more fascinating is that we then see the licensee information below. This product (for infant shoes) was made by ABG BABY, distributed by Rising Star. While this is fairly typical for big brands, I'm surprised that so much is surfaced so readily here.

This tag falls a little flat for me. I'm really not enjoying the somewhat lazy color scheme. For some reason the world of infants is very sensitive to gender coloring, and this tag is safely gender neutral (soft greens, slate, and sometimes yellow being the widely accepted top picks in this area). Still, nothing about this screams Disney, which is generally the most overdone and on message brand in the existence. It feels uninspired, like someone figured if they just typed "MAGIC" a bunch of times it would fully qualify, but the Disney Magic isn't just about saying the words, its about fully committing to them.

I actually like the licensee's banding a little bit more, the ABG BABY in baby blocks is a nice treatment, if somewhat expected.

As I touched on above, I'm ok with a name.com if used in a sentence, and additionally, I think Disney is a brand where the sub domain makes sense. Disney has famous theme parks, famous movies, famous characters, and famous toys. I wouldn't go to the Disney homepage and expect to find baby clothing without a few additional clicks. The distributor also has a web address, and since it is slightly different from the name, I think listing it in full makes sense. Good web use here.
Posted by Spencer at 6:18 AM