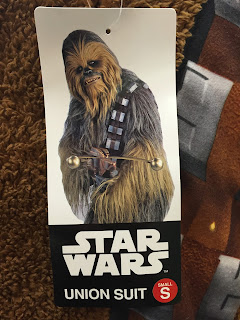 Disney's acquisition of the Star Wars franchise has turned up the licensing machine full force, and in addition to a steady stream of new movies we are being treated to a near constant barrage of merchandise. This hang tag comes from one such item - a Chewbacca Union Suit.

First and foremost, it should be explained that a Union Suit is merely a descriptive term for a single undergarment that combines a shirt and a pair of pants. Think long johns or those pajamas that are in old cartoons with a snap up button panel. Do not think to search them on Google images without safe search on.

This one is designed to look like the character Chewbacca from Star Wars. Presumably one part Halloween costume, one party novelty item, this is a lowest common denominator item. 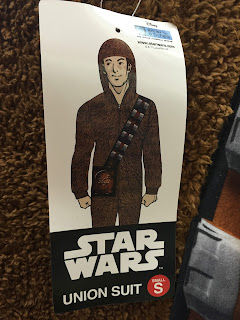 The front of the hang tag is straightforward - the top portion is a picture of Chewbacca pointing his signature crossbow at the camera. The bottom has the Star Wars wordmark in negative with the words UNION SUIT below and a red circle with an S and the label SMALL. This is really terrible in terms of hangtags. It does not seem terribly well through out and it fails to convey any real sense of design or effort.

The reverse is a tiny bit better. Instead of the photograph of the actual Chewbacca, there is an incredibly goofy illustration of a very doofy guy wearing the suit. Otherwise it is the same as the front.

I have a lot of problems with this tag. It is really low effort, all they did was put a picture on it with a brand wordmark and a descriptor. I like simplicity and clean designs, and this is simple but is not particularly clean. Simply throwing all your logos onto a card isn't design, its hitting a checklist.

It is almost as though they know that these will not be purchased by true fans (who will go upmarket) but instead by someone's distant relative who is a bit out of touch but will say "Oh, didn't he used to love those space movies?" If anything, I imagine most of these end up as gag gifts, purchased for drinking-holiday parties or as a good natured goof for a spouse.

I had some excitement about a Disney branded tag, but so far this and the children's one I reviewed here have both fallen incredibly flat.